Sharing my insightful story about life, work, and study in Europe
In English

I Come from a Third World Country and I am Grateful

I come from one of the biggest islands countries, Indonesia. Well, some people mistakenly think that it is India. Others probably have only knowledge of Bali. The island is indeed more popular than the whole country.

Indonesia is known to its citizen as a country that is rich with natural resources. Oil, gas, coal, etc. It also has very beautiful nature. But why is Indonesia still considered as a poor country? In my own opinion, it is probably because Indonesia is poorly managed. Additionally, the country consists of approximately 17,000 islands and around 260 millions inhabitants. These, I think, make the country become even harder to manage.

Even though Indonesia is not a developed country, it is actually considered as one of the most generous countries in the world. Interesting, right?

People who live in poor condition are often associated with bad health care and education system which can lead to a bad life. But these people are actually generous eventhough they don’t have that much.

I am now currently living in one of the happiest places on the planet, Denmark. Little did I know, that this country is actually one of the most unfriendly countries on earth. Funny?

Living in a happy place like Denmark have changed me. I am so grateful that I learn more about individual freedom, get access to health care, and even get a chance to join danish school. Of course, for free.

On the other hand, I have also become more individualist and perhaps a bit sarcastic.

I notice that people who live the first world country sometimes take things for granted. Every basic needs they have are already taken care. Doesn’t matter how much someone earns, he can always sends his children to the university. People can paid parental leave and good health care system. Because of this, they are basically, in my own opinion, lack of basic problems. People will be more focused more on little things (my version of little) such as their looks, their houses, the bacteria on their food, etc.

So, many people forget that there are actually many reasons to be grateful about. They take the basic things for granted.

When I was in my homeland, I was more a naive but hopefull individual. For some reasons, I don’t have this burning spirit again in my heart. Probably due to the fact that everything is already easy, there is not much thing to hope for in terms of daily life.

It is maybe very odd to say but I am grateful that I was born and raised in a third world country, in Indonesia. I learn about being ikhlas, having a big heart that just because I give someone a kindness doesn’t mean that they need to give the same. Here, it is mosty about give-and-take.

I learn about being patient. I got stuck in a traffic for three hours and can still say at least I got a workplace to go to. Now, I can be pissed if I missed the train just because I ran 2 minutes slower.

Seeing people selling food under the bridge and still manage to give a smile to their costumer is just a heart-warming thing to see.

Of course, my country is not all good and the first world countries’ citizens are indeed have their privilege but I just can’t really imagine being born not in Indonesia. 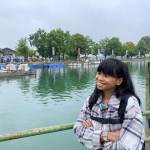 A deep over thinker, food and books lover who enjoys occasional writing as a way to share and to meditate. Of course she mostly does it when she has the mood for that.

What a lovely day 😋